Turin is the chief town of the Piedmont region and the capital of the province. It is situated at 239 metres over the sea level, at the confluence of the Dora Riparia with the river Po. The area of Turin is about 130,2 square kilometers and the population is approximately 900,990 inhabitants.

The city is placed on the west border of the Pianura Padana (latitude 45° 04’ north), between the Alps which crown it in the west side and the hills in the east side. Turin stands in an excellent geographical position, near the exit of the highways coming from the alpine tunnels and from the passes, and even in the past it was an important trade and strategic centre.

The city keeps the road network inherited by the Romans and it was enlarged and modernized again by the Savoy dynasty, and from the 16th century, they gave to their city a rational and precise urbanistic organization, perfectionated and completed in the following centuries.

It was remarkable the urbanistic and building renewal in the 19th and 20th centuries, which saw the creation of new important streets and avenues with trees, the construction of new buildings and green areas (among them the beautiful park of Valentino).

The subalpine city struck the visitors with its geometrical order of its streets, seldom with arcades, for the symmetry of its monumental squares for the architectonical homogeneity of its palaces and for the regularity of its long avenues. On one hand there is the elegant aspect of palaces, and on the other hand there is the pleasant aspects of the surrounding hills: Superga, the Monte dei Cappuccini, the Colle della Maddalena and the vast park of the Rimembranza and the faro della Vittoria, the Borgo di Cavoretto with the Parco Europa, the public park of Villa Genero, etc.

In the centre of the city there is Piazza Castello, and around it there are the main historical monuments of Turin and where it exits the elegant and always overcrowded via Roma. On the ancient houses of the historical centre stands the Mole Antonelliana (its final spire was reconstructed after the storm which destroyed it in 1953) erected between 1863 and 1878 by the architect and engineer with the same name Alessandro Antonelli.

The residential neighbourhoods were developed along the Po and on the hills on the right side of the river, connected by great bridges that unite the two sides of the river: bridges Balbis, Isabella, Umberto I, Vittorio Emanuele I, Regina Margherita, Sassi. Instead, the industrial neighbourhoods are located in the suburbs, north, west and south.

Turin, become chief town of an important mechanical and textile district is a propelling centre of a vast urban conglomeration, the second after Milan, amongst the major Italian industrial centres.

The main Turinese industry are the mechanic and metallurgic ones, especially in the car field, which sees in the great groups like Fiat and Lancia the representatives of the greatest national car industry.
The huge complex of Fiat, which has several factories in the Turinese district, produces cars, planes, rail cars, tractors, engines for ships and airplanes railway material, etc.

The activities or the tertiary are a more an more strategic part of the economical system of Turin with a great number of workers in the wholesale trade, in the transports, in the credit and insurance in services to the industries.

In the 80s and 90s, the crisis that struck the Fiat car industry, pillar of the city economic, that spread to all the induced activities. Moreover, the several processes of reconstruction in various industrial fields (mechanical and electronical), had serious repercussions in the working level. 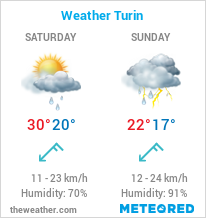